Sarah Dunn is the Director of EMEA Marketing at Aruba Networks. Sarah was tasked with hitting aggressive pipeline targets by November 2019 and was looking for an agency partner to support with campaign ideation, messaging and deployment. bbd engaged in a consulting capacity, with the remit to deliver the fully integrated campaign.

Sarah needed to create an integrated marketing campaign to take Aruba’s Enterprise proposition to the mid-market segment. The campaign needed to leverage the marketing assets and sales enablement materials produced by global marketing team, but also accommodate the nuances of the EMEA market.

Aruba had already identified two key mid-market audience personas – the Head of IT and the IT Generalist. These personas presented some challenges that were very specific to mid-market in terms of how we talk to them and what their priorities are.

Hear Sarah Dunn’s thoughts on partnering with bbd and the performance of the campaign in the video below.

In targeting mid-market, we needed the creative to span the culturally diverse EMEA region where people look for clarity of message with speed. We also needed to communicate complex pain points in way that was easily digestible. Our answer was a creative route that leaned heavily on symbolism, rather than people, enabling us to communicate a dynamic feature set in a highly visual and simple way.

Equally, messaging needed to shift Aruba away from product- and feature-led copy into campaigns more rooted in audience pain points. We needed to demonstrate an empathy and understanding of the challenges and opportunities faced by IT Decision-makers and IT Generalists. Ad copy needed to leverage the latest solution messaging but frame pain points in human terms—identifying relevant psychological triggers, use-cases and contextual proof points in order to incite intrigue and drive click-through rates (CTRs).

Ultimately, Aruba needed an end-to-end campaign execution framework that would deliver a consistent user journey from point of entry via social, to becoming a qualified lead, and through to sale. 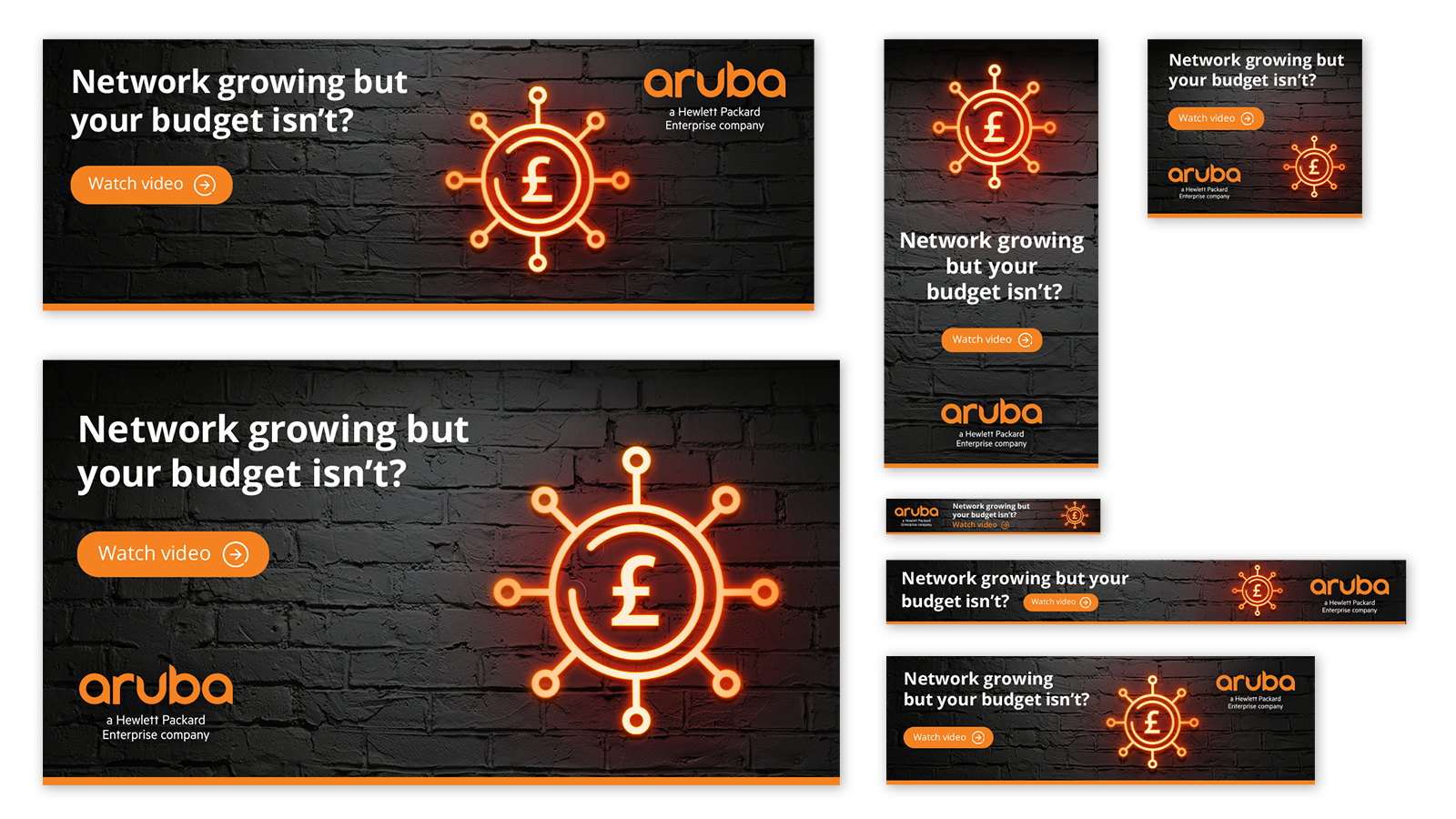 bbd spent two weeks assimilating all the background information from Aruba, digesting analyst reports, whitepapers and product/solution collateral to understand the complexities of the mid-market audience, their specific challenges and opportunities.

Next, we held a full-day, face-to-face discovery workshop in London to talk through the intricacies and specifics of the campaign, what had been done in the past, and what had and hadn’t worked to date. The output of this session was a clear definition of the campaign requirements and a plan of execution.

From this point, bbd continued to work as an extension of Sarah’s team. We employed a highly agile way of working, communicating ideas at speed. This fast and lean approach enabled us to work very iteratively. Sarah was able to provide guidance at key points and steer the campaign direction, while providing bbd the autonomy to work independently. 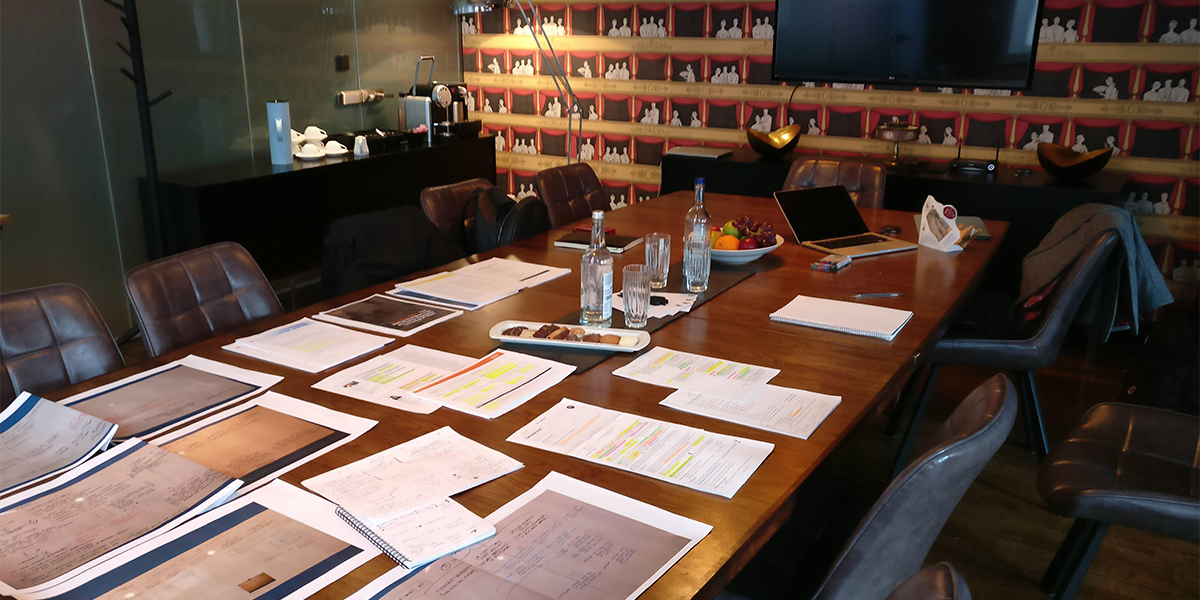 “From previous roles, I’ve worked with bbd before, and the consistency and approach they take to deliver a very iterative and agile route to delivery really works for me and the way we work as a team internally…because what doesn’t work for us is agencies working in the dark and then a big reveal.”

Over the course of three months, we planned and produced a fully integrated campaign, including messaging, go-to-market creative and an activation plan. ­We then transitioned into an ongoing run-rate execution, in which we worked with Sarah’s team to optimise and refine campaign performance.

We drew on current realities for our two audiences to create the messaging. IT Decision makers were under pressure to deliver fast, seamless, reliable and scalable network experiences – echoing those of large enterprise networks. But they needed to deploy and maintain these complex networks with limited staff – 40% of which will be generalists by 2021 – and with a flat IT budget. 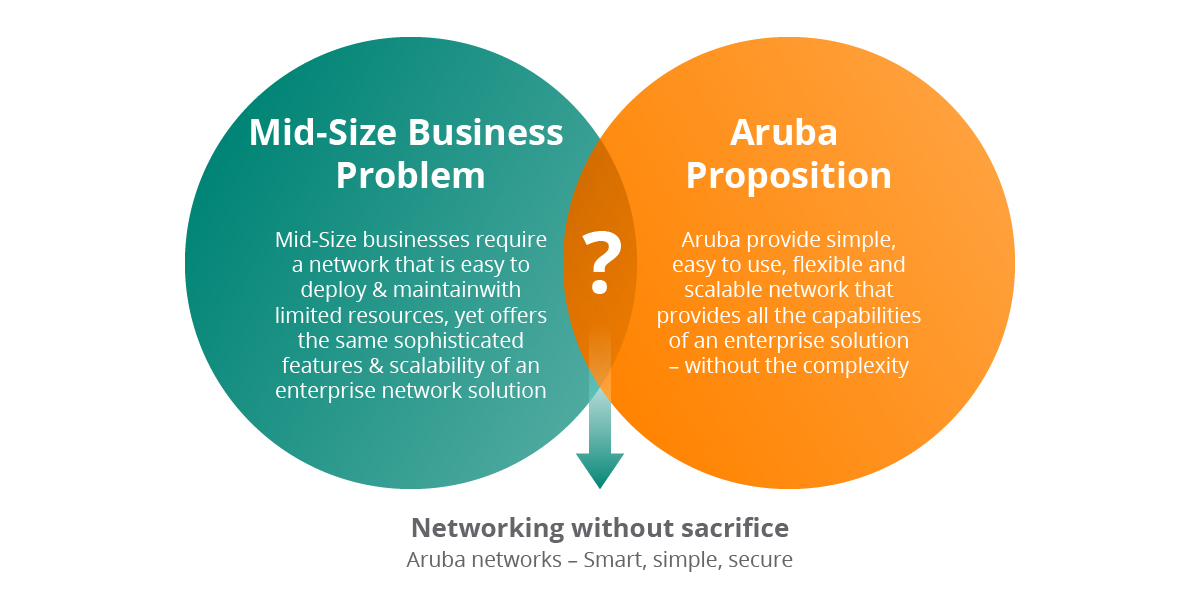 We identified that the core issue for midsize businesses was the need for a network that is easy to deploy and maintain with limited resources, yet offers the same sophisticated features and scalability of an enterprise network solution. This aligned with Aruba’s core market proposition – networking without sacrifice.

Our efforts then focused on how to take this proposition to market. We reimagined Aruba’s product-focused messaging and made it more human, giving it an emotional angle that would resonate with our target market, whilst remaining true to Aruba’s brand voice.

“It was invaluable to have external eyes on the work we had available and how we could reimagine it in a customer-centric way. We wouldn’t have been able to achieve that if we hadn’t had the planning services and the nature of the relationship that we did with bbd.” 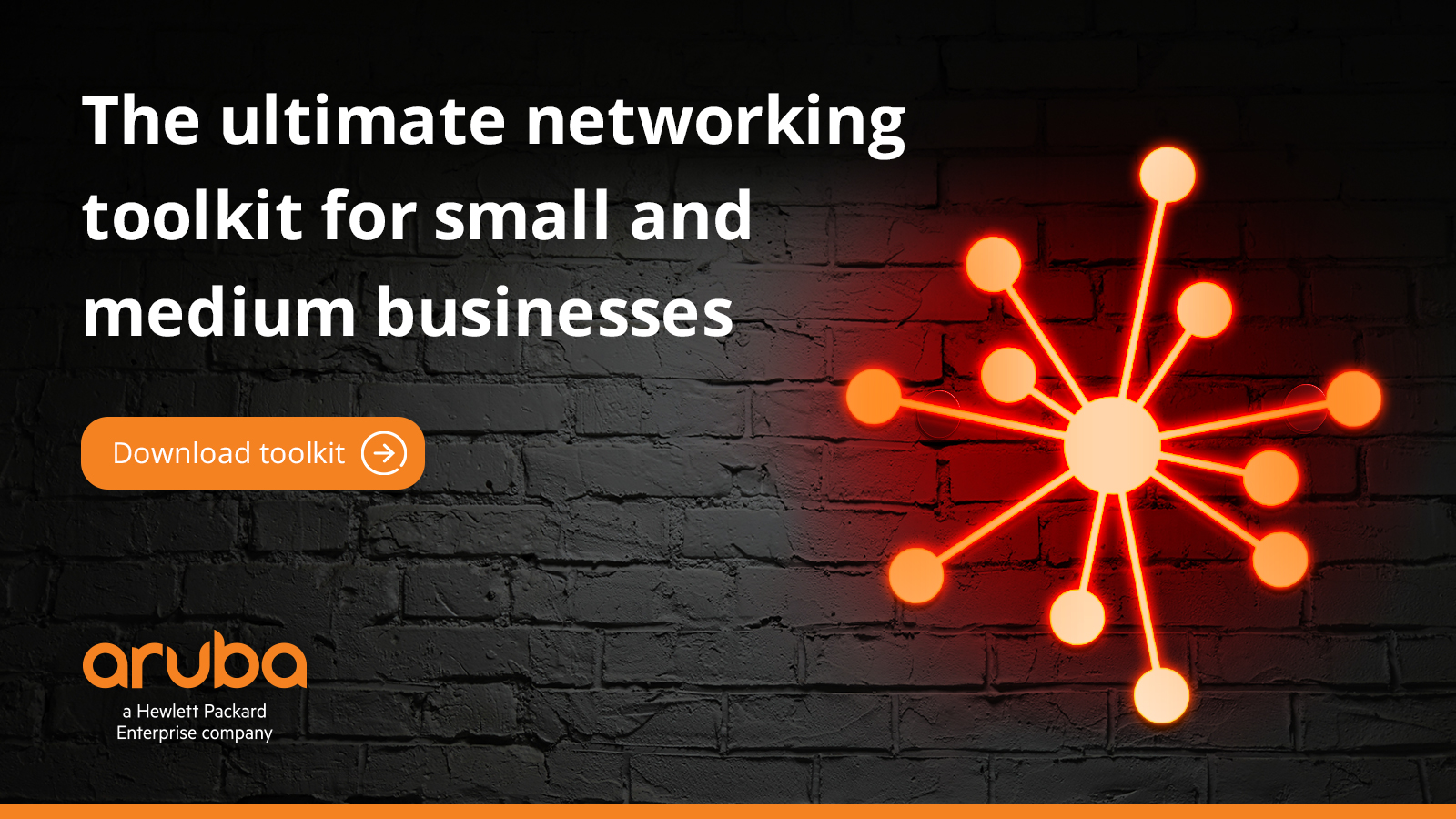 We then devised a fully integrated go-to-market campaign strategy, including paid social on LinkedIn and Twitter, and across content syndication channels, including TechTarget and EIMS. All traffic was directed to a central campaign landing page with prospects able to navigate across relevant pieces of content within an immerse content platform – Folloze. Ultimately, the objective of this campaign was to help prospects reach a point of decision and submit their details as a marketing-qualified lead, at which point they were entered into a seven-step Eloqua email nurture. 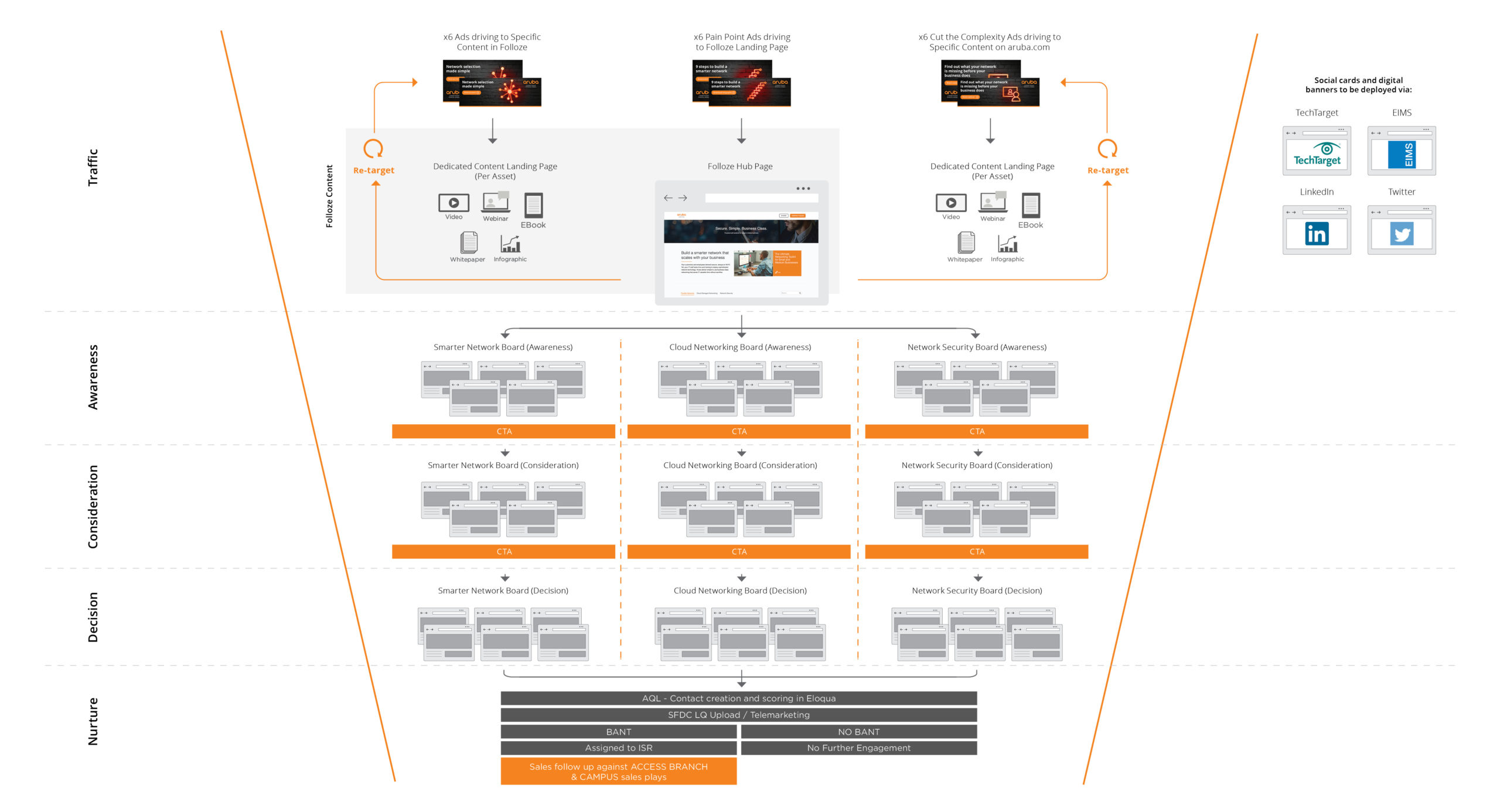 The campaign went down well internally and with the target audiences. Initial metrics and measurement after 6 months of activity are really positive. Sarah shared her thoughts on the performance of the campaign.

“The campaign output absolutely resonated with the audience. Some of the trends that we’re seeing are increases in preference rate, for example, through content syndication. That preference rate has increased by several points over the last year while we’ve been executing the campaign. That’s backed up by some of the banner ads we’ve produced within the campaign, where we’re seeing a 2-3% increase in terms of engagement rate. So, we’re seeing really positive markers. The top of the funnel is healthy. There’s easily a 5-10% increase in the top of funnel responses coming from mid-market now than there was a year ago.”

The value to the business and Sarah

We asked Sarah to tell us about her experience of working with bbd. Here’s what she said:

“One of the key elements of value that bbd brought to our business is their capability in being able to take a campaign from planning through to execution and then to delivery through all of the touchpoints.”

“Another reason that working with bbd is successful for me and the team is that we have a partnership mentality. The roles and responsibilities are defined but not shackled to everybody. So, we are an extended virtual team and I view all the people at bbd as a part of that team.” 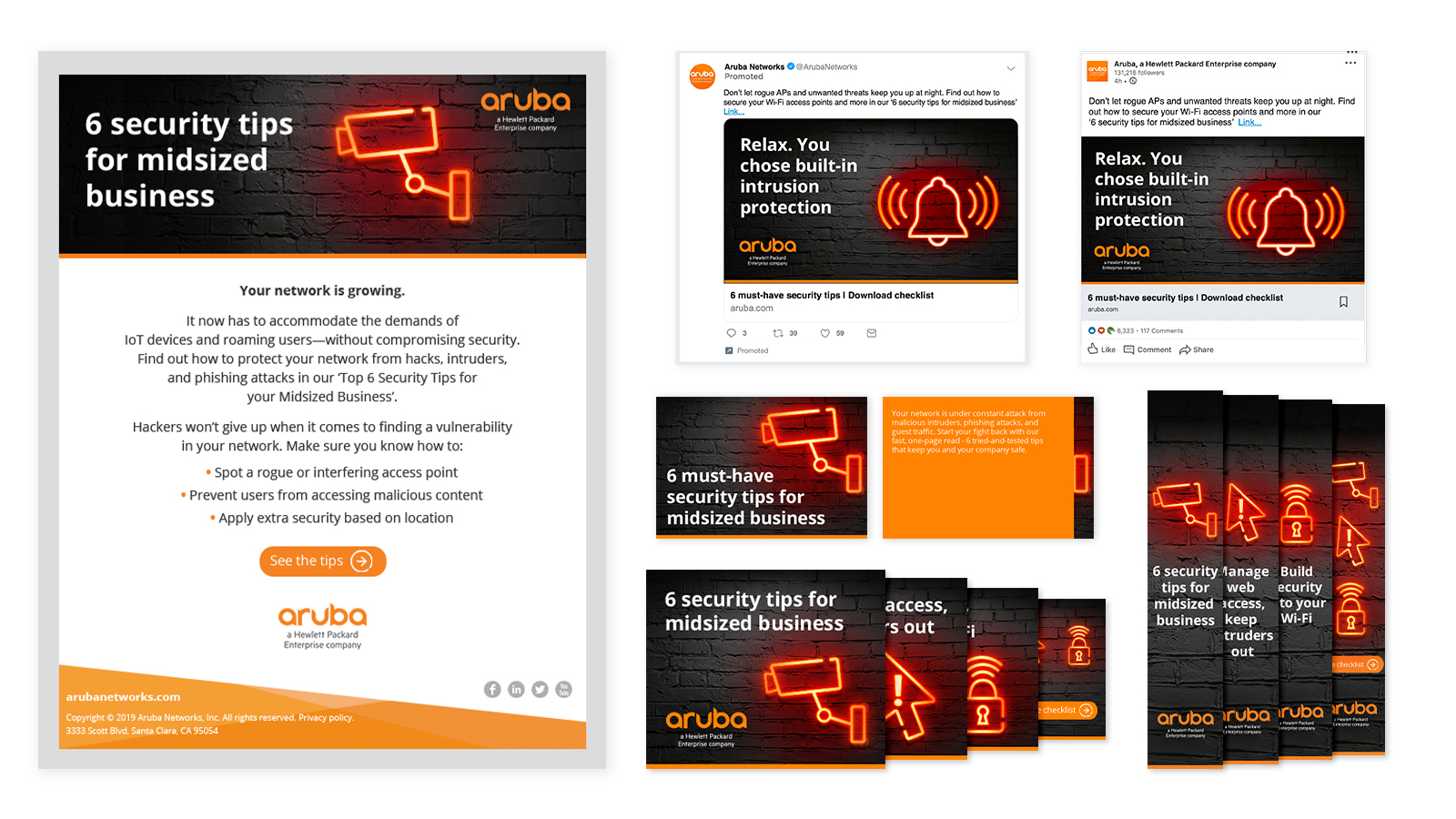 “bbd listens, absorbs and recommends, rather than taking things at face value. It leads to robust conversations, it’s very rewarding and the outcomes are very strong.”